Assessing the impact of your next funding round

Learn how founders can use Rows to calculate the impact of a funding round on the startup cap table, including valuation, dilution and new shares to issue.

Raising money is hard – regardless of whether you're raising your seed round or going for your next big series B. You need to find the right investors who buy your vision, get them on board, and have a strong understanding of financial and legal clauses.

In particular, it requires founders to give up some equity, permanently changing the cap table and the future scenarios in case of any liquidity event. In this guide, we will show you how to handle a simple model to calculate the impact of a new funding round on the current ownership structure of your startup.

Here’s a sneak peek of what you will get: 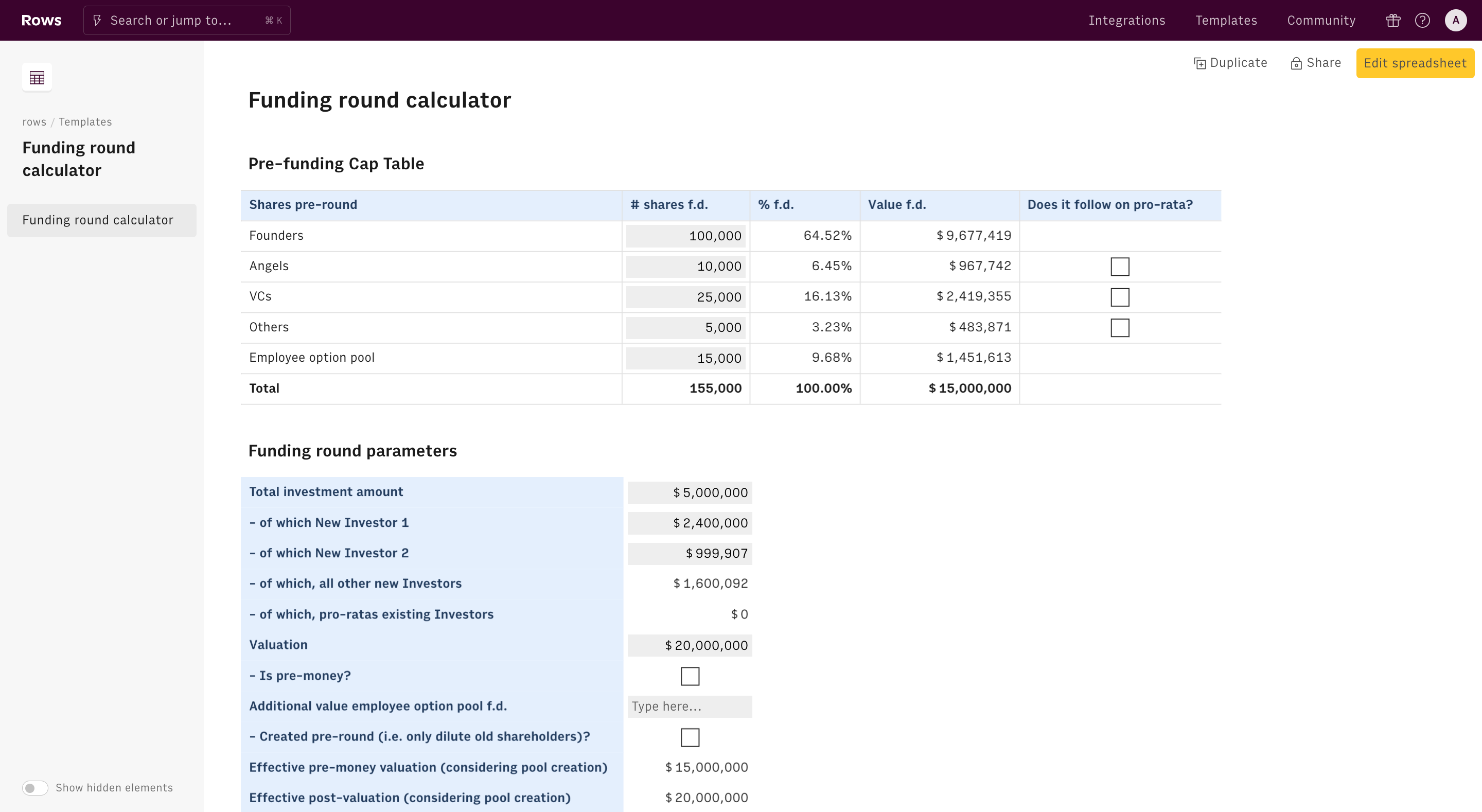 Before looking closely at our funding round calculator, let's go through some useful concepts:

To use our template, follow the link Funding round calculator, click on Use template and save it in one of your workspace’s folders.

This template offers you an easy UI to assess the impact of a new funding round over a company's existing cap table.

Let's reverse-engineer it together.

All you need to do is to input the number of shares for all current shareholders in column B, such as the founding team, VCs, Angel investors, and employee equity pool.

Column C will automatically compute the % share in fully-diluted terms, while column D will assess their respective stakes' monetary value, by multiplying the pre-money valuation set by the next round and the number of shares.

If some of your current investors are following up in the new funding round, check the box in column E: they will be considered pro-rata in the computation of the new cap table.

The second table allows you to input the details of your upcoming funding round. 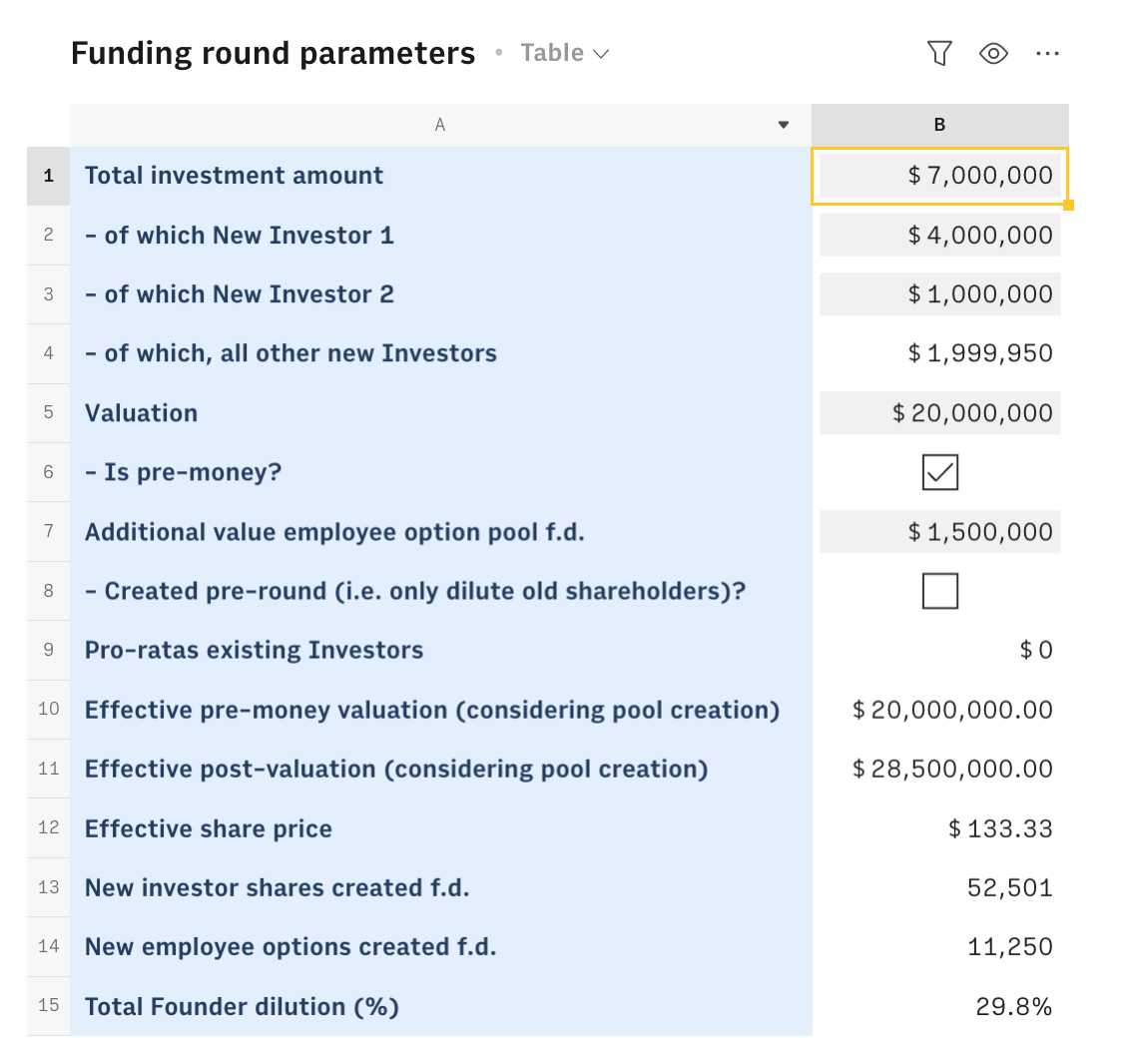 Since a new round usually involves more than one investor, with one taking the lead, we chose to adopt the following logic: set the total amount raised in cell B1, along with the two main investors' amounts in B2 and B3. Cell B4 computes the residual amount left for 'Other new investors.

Be mindful that the numbers add up: if you have some of your current investors following on the round pro-rata (i.e. investing their own % share of the round not to get diluted), you might need to lower the amount raised from new investors 1 and 2.

Use cells B5 and B6 to input the round valuation and whether it's pre- or post-money. In most cases, the pre-money is the one discussed with investors in the term sheets and investment contracts.

In cell B7, you can create (or add money to) your Employee Equity pool, a portion of the company shares devoted to incentive managers in the team. If that money is added before the round, then tick the box in cell B8. This way, only existing shareholders will be diluted. Vice versa, the effective pre-money of the round will change, as shown in cell B10. This happens because now anyone, including the new investor is impacted, virtually raising the pre-money by the amount allocated to the pool (i.e. shares that are assigned but do not entail a cash inflow).

As stated in the glossary, the post-money valuation is just the sum of the pre-money, the round size, and, if created post, the employee equity pool.

The share price paid by the new investors is computed as the (effective) pre-money valuation divided by the outstanding number of shares (as displayed in the pre-funding cap table), as follows:

Finally, cell B15 displays the total dilution triggered by the round - i.e. the % share of the company that is given up as a result of the total round - and it is calculated as the new shares issued divided by the total new shares outstanding (pre-round outstanding plus new ones), as follows:

The logic employed is the same as in the first one: the table computes the number of shares fully diluted, derives the % ownership, and then shows each stake's monetary value, as the effective number of shares times the price paid in the new round.

The number of shares of current investors (Angels, VCs, and Other) is either the same as before - in case they decide not to follow on the new investment, as in the If false statement of the formula below - or adjusted to preserve the same % share - in case they do follow on the round, as in the If true statement of the formula below -

Other amounts are instead computed as the ratio between the amount invested and the price paid per share.

Please notice that some minor inconsistencies (in the order of some hundreds of Euros) might be due to approximation functions in the number of shares issued and share price.

In case you are raising a round with more than 2 primary investors - e.g. you want to display New investor 3 in the cap table - just add a row above row 4 in the Funding round parameters table and input its contribution in column B. Then do the same in the Post-funding cap table: add a row above row 9 and replicate the forumula in column B referring the amount invested in the table above:

Be mindful of amending the formula in cell B10 of the Post-funding cap table: to compute the right # of shares left to Other investors in the deal, subtract B9:

Finally drag formulas in column C, D and E to complete the table.