Learn how to use the FILTER and FILTER_COLUMNS functions to build specific views on your data.

is great for filtering entire tables. But what if you want to filter only a subset of the table?

For example, maybe you want to filter the “price” column by a certain price range but only for rows where the product column contains “iPhone”.

In complex cases like this, it’s often better to use a formula to construct your filter query rather than relying on the user interface. That’s where the FILTER function comes in handy.

You can use the FILTER function to filter data in a normal table or in a {data} cell.

In this guide, we’ll show you:

If you'd like to experiment with the examples in this article, open the accompanying spreadsheet on the Community Page and click Duplicate to add a copy to your workspace.

The easiest way to get started with the FILTER function is through the Function Wizard.

To use the FILTER function with the Function Wizard, follow these steps:

To get a better idea of how this function works, check out the following examples:

Filter for specific values in a column

Here we want to filter for web pages where the exit rate falls within a realistic range, such as between 10% and 75%. We also want to make it easy to change the range, so we can experiment with different ranges.

It would be easier if we could put the minimum and maximum range in cells and have the filtered view update automatically whenever we change those cells.

You could put these criteria in a dedicated “FilterCriteria” table, like this: 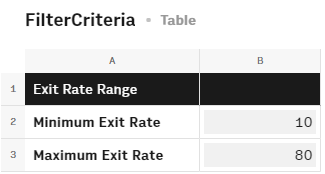 To filter for Exit Rates in a specific range, using the values in our FilterCritera table, we could use the following FILTER formula:

Here’s a breakdown of how it works:

When you enter this function, you’ll get a {data} cell, rather than a filtered table.

To see the resulting data in a table:

The resulting table should resemble the following example:

We now only have rows where the exit rate falls within the range that we specified in our "FilterCriteria" table.

Filtering data in a {data} cell

In our previous examples, we’ve been filtering data in a source table to create a second filtered version of that table.

However, if you’re using integration functions to get external data, you don’t need a source table. You can filter the raw data in the {data} cell, and create a table from the filtered result—so one less table to worry about.

If you view the data you’ll see that there are a number of interesting attributes to filter on—for example, the year that the VC was founded.

Let’s say we want to narrow this list down to VCs that were founded before 2016. In this case, we would enter the filter formula like so:

Now we can go further, and put our filter criteria in a separate cell like last time. In the following example, we’ve put it, the FILTERformula in B3 and referenced the cell above it for the filter criteria (B2). 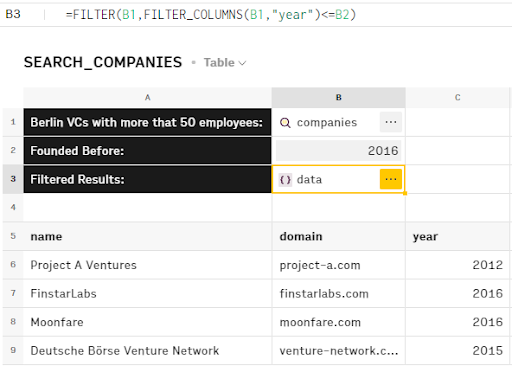 The FILTER_COLUMNS function gives you a way to isolate specific columns that you want to work with. For example, let’s say you’re working with Google Analytics report but you’re only interested in Bounce Rate.

Your visitor report table might contain a lot of metrics like “visits”, “%New Visits”, and so on. However, you want to get a view that includes only the columns that you’re interested in.

You can create a simpler version of this table by filtering for just the relevant columns.

To render the data as a table, you can then nest this formula one of the INSERT(), OVERWRITE(), or UPDATE() functions like this:
=OVERWRITE(FILTER_COLUMNS('All Data'!A1:H100,'["Page","Bounce Rate"]'))

Which produces a much cleaner looking table:

By the way: if, for some reason, you’re annoyed by the table headers, you can omit them from the formula result.

As useful as FILTER and FILTER_COLUMNS are, sometimes you need even more flexibility. Fortunately, there are more advanced methods for parsing and filtering the contents of {data} cells in particular.

To learn more about these methods, check out the following articles: