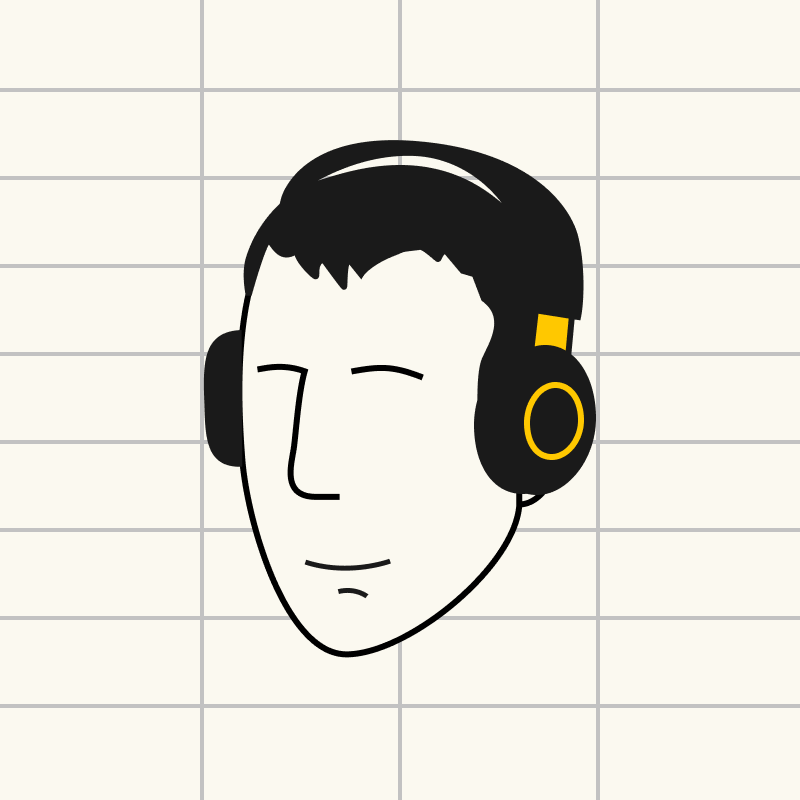 If you've spent any time on the Twitterverse you've seen it before - Great products don't need marketing.

While that sounds great on a tweet, it just isn’t true. Getting scalable product distribution is decisive your startups success, and Marketing plays an important role. Even companies that are "Product-Led", are also "Marketing-Spread".

Marketing takes many forms - which I won't cover in this blogpost - but one of them is Public Relations (PR). This is when you get coverage by the press, i.e. industry publications, thought leaders or other traditional media outlets (newspapers, magazines).

PR isn't going to be the central piece of your growth flywheel, but it can play an important role in acquiring, activating and even resurrecting users. In particular, PR helps with:

At a start-up your press attention is normally limited to funding announcements or other large noteworthy events (e.g. an acquisition). The challenge is getting beyond that and build an engine to get recurring media attention.

Since we scaled our go-to-market efforts in Q4 2021 we've devoted quite some time on this topic. Today I'll share threes stories of how we got media attention at Rows recently, outside funding announcements or other big company news.

The tweet that lead to an article on Wired

In February this year Humberto (our CEO) hosted a workshop with the founders in the portfolio companies of Armilar, our Portuguese minority investor. The session was about our story: the product, going from 0 to 25k users, our go-to-market strategy and how we're building the company.

We've historically seen that posts where we share insights, numbers, and specific stories about building Rows tend to perform very well on social media. This workshop felt like another great opportunity to do just that: re-use the content of the presentation and turned it into a Twitter thread.

We did just that. Humberto tweeted it in his personal account, which typically performs better for build in public posts. There were 3 key ingredients: a provocative opening: “Rows is the Excel killer”; posting real, relatable numbers; and picking the right image: 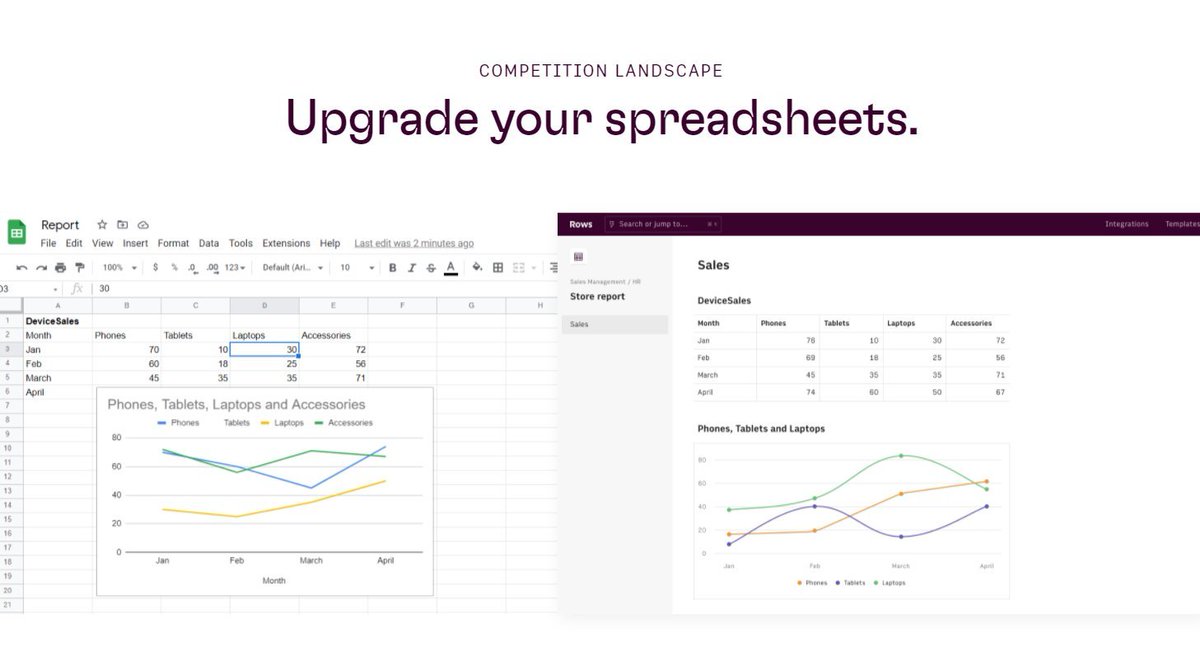 Fast forward a few hours and Humberto got a DM from a journalist who was doing an article for Wired about spreadsheets and happened to see the tweet. The DMs turned into an interview with us and with a reference customer, which in turn led to this article. All starting from the idea of engaging actively with the community and building in public.

The PR stunt that got us on Tech Radar

For the second story we got extra creative.

Ever since we rebranded from dashdash to Rows in 2020, brand has been top of mind for us. In particular, how to build a brand that people recognize as a better alternative to Excel and Google Sheets. Our strongest brand differentiator is the juxtaposition to the Microsoft and Google: the older, stronger Goliaths against the upcoming David who is taking on a seemingly impossible challenge.

With that in idea mind, and inspired by similar campaigns done by other brands in the past, we decided to buy two billboards close to the Google HQ and MSFT HQ announcing our arrival, with an unconventional message that tied directly to our brand differentiator.

First, we announced it in a teaser on social media 👇 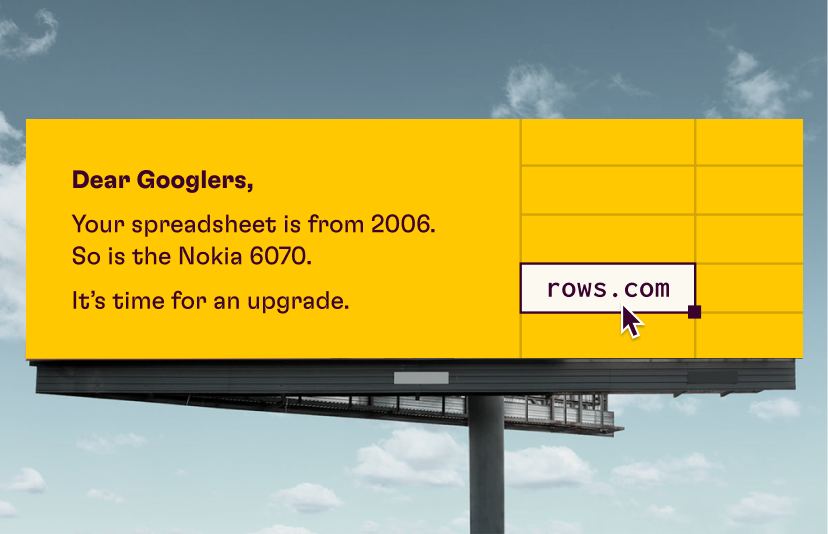 Then, after the billboards were live, we worked with our PR agencies to get story out:

Finally, continuing our habit of “building in public”, we took this opportunity to tell the story behind the campaign, including costs, photos of the actual billboards, and its impact. 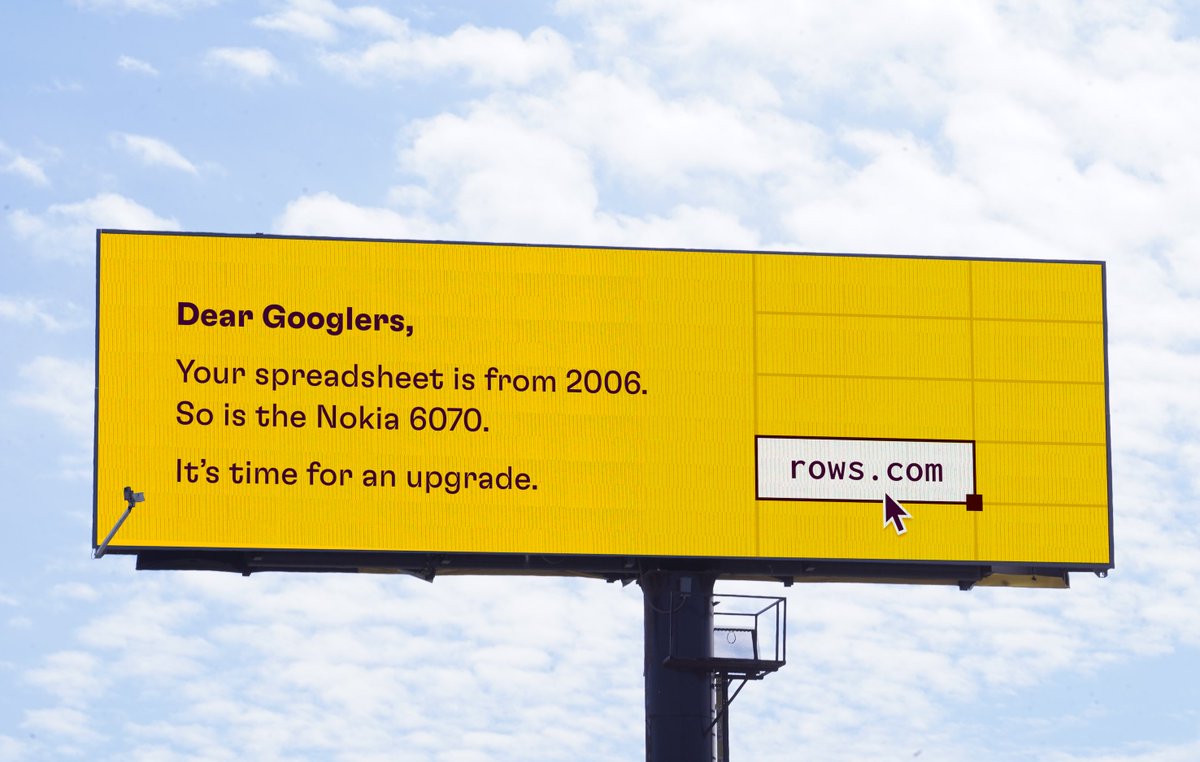 This campaign was the most impactful of the three, generating from than 5k new sign-ups, plenty of social mentions, and a lot of smiles.

The Portuguese startup scene is on a roll, and the list of unicorns keeps growing every year. We decided to take that hook and combine it with one of the value propositions of Rows - instant access to company data with our data enrichment integrations - to create a list with the 50 fastest growing startups in Portugal.

What was unique about this campaign was its link to the product:

And as a side benefit, this page also gathers clicks and visits everyday from search engine results.

This is it. I hope these 3 stories illustrated how startups can be creative and get media attention and tell more than just “we raised X amount and are doing great”.

As we like to say at Rows, “Marketing works”. And while PR is unlikely to be your #1 growth lever, it can help establish your brand, tell your story to the world, and get you more than a few new customers.

To us, these results were the validation to continue investing in PR. This quarter we have a couple of other campaigns in the works that we think will be just as fun, and even more impactful. Keep an eye on our Twitter for those and other Rows news.

And if you’re curious about what we’re building, give Rows a try 👇

P.S.: Christopher Janz from Point Nine Capital wrote a great article on Startup PR for dummies. Give it a read here. 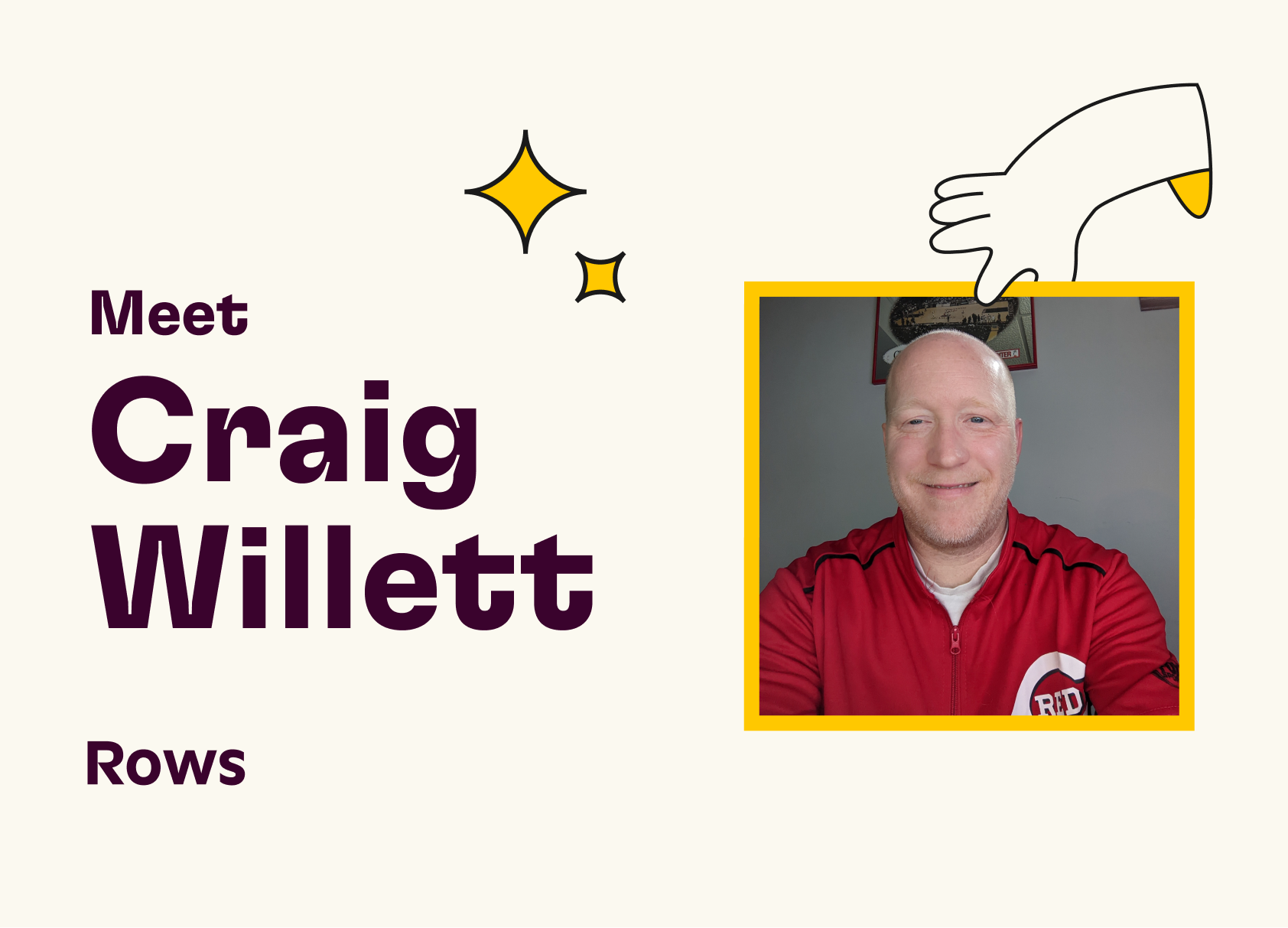 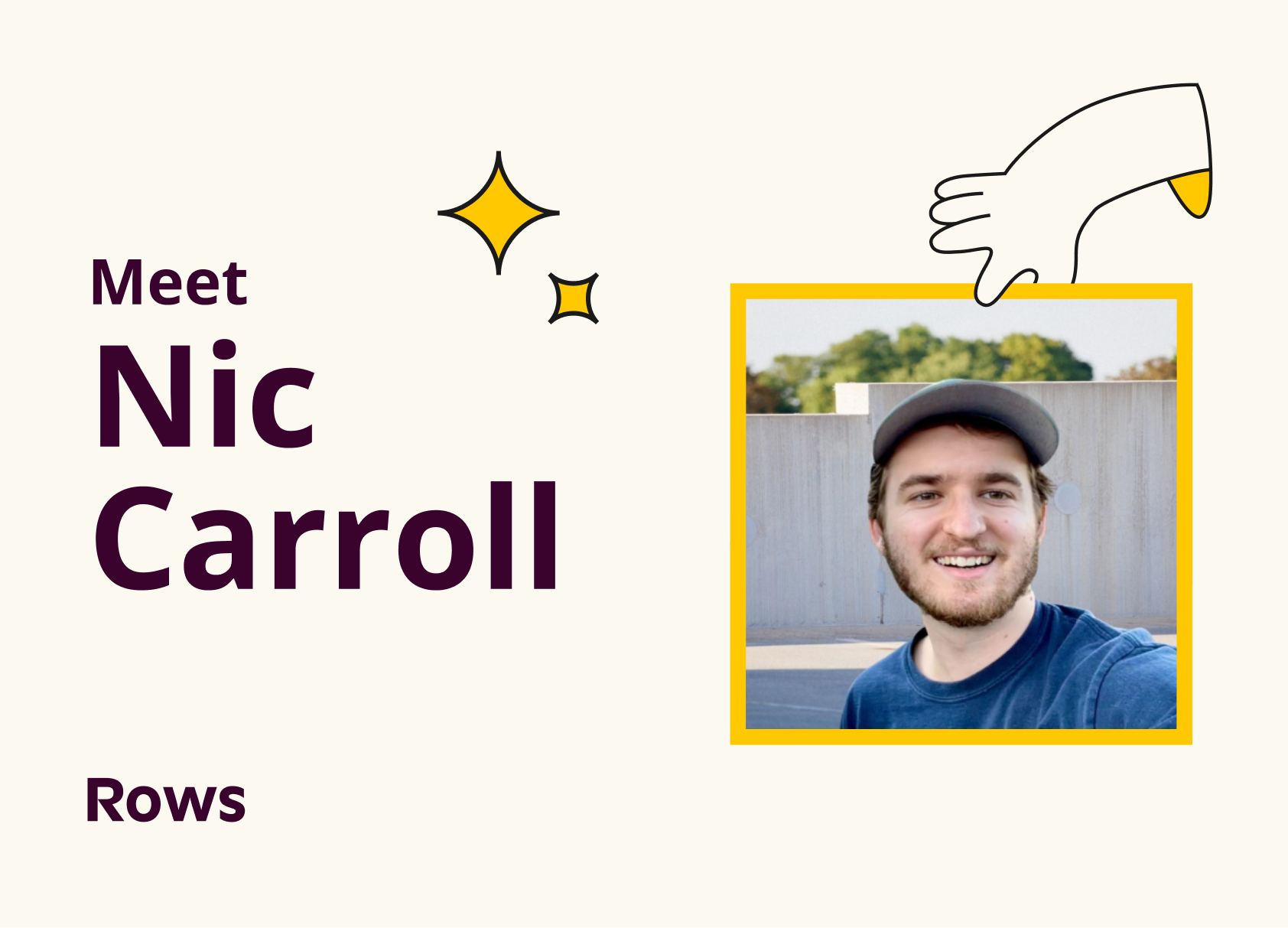