Filter and transform data from a range of cells using an SQL-like language.

What is the QUERY function

The QUERY function in Rows allows you to use SQL (Structured Query Language) to analyze and manipulate data in your spreadsheet. It is a very powerful and versatile function that can be used to perform a wide variety of tasks, such as filtering data, calculating statistics, and even joining data from multiple sheets or tables.

How does the QUERY function work

The syntax for the QUERY function looks like this; =QUERY(data,query,[headers])

Let's first define what these 3 mean.

This is the data from the spreadsheet range you want to query. There are 4 ways the data can be expressed;

This is the SQL command that will be used against the data provided. The SQL command consists of several clauses, some of which are mandatory and others which are optional. Below is a definitive list of all clauses available within Rows.

Leaving this argument empty will result in a "SELECT *" command that will return all results from the requested data.

This is how many rows are considered the headers of the data. The default is 1.

Below we will outline the basics of what can be done through SQL, but we highly advise familiarising yourself with SQL through other educational content.

It is important to note that the clauses should always be used in this order;

WHERE is a conditional clause used to filter the data. It accepts all arithmetic operators, such as;

Note: Strings will need to be wrapped in single quotes but numbers should not be.

GROUP BY allows you to group the result set by one or more columns, providing a more granular view of the data.

It can be useful when you want to summarize or analyze data in your spreadsheet by groups or categories. For example, you could use the GROUP BY clause to calculate the average cost, maximum quantity, or total sales for each product category.

It is typically used in combination with one or more aggregate functions, such as SUM, AVG, MIN, MAX, or COUNT, to perform calculations on the grouped data.

For example, consider the table below; 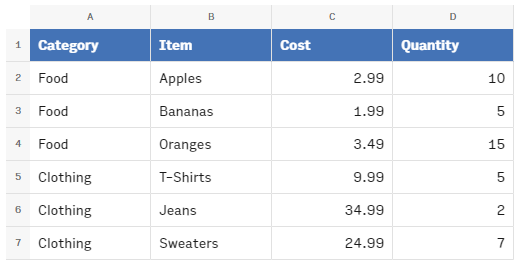 If we wanted to create a pivot table that shows the total cost of each item within each category, we can use the following QUERY function:

This produces the following table:

PIVOT is used to rearrange and summarize the data in a table. It allows you to transpose the data from a horizontal orientation (rows) to a vertical orientation (columns), or vice versa. This can be useful for creating pivot tables, which are a common way of summarizing and analyzing large sets of data.

Take the table below as an example:

For example, if we wanted to create a pivot table that shows the total cost of each item within each category, we could use the following QUERY function:

In this example, the PIVOT clause is used to convert the Item data from a horizontal orientation (rows) to a vertical orientation (columns), with one column for each Item. The SUM function is used to calculate the total quantity sold for each product. The result of this would be the table below:

ORDER BY is used in the QUERY function to sort the rows of a table based on the values in one or more columns.

It can be useful when you want to present your query results in a specific order, e.g.alphabetical, by date, or by a custom order that you specify.

Ascending order is the default. You can also use the DESC keyword with the ORDER BY clause to specify that the rows should be sorted in descending order.e.g. to sort in reverse alphabetical order, by the latest date, or by the highest or lowest values in a column.

For example, if we wanted to create a table that shows the cost of each item within each category, sorted by the cost in descending order, we could use the following QUERY function: 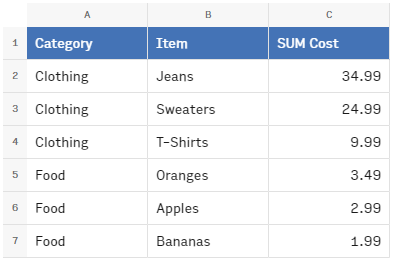 LIMIT is used in the QUERY function to specify the maximum number of rows that a query should return.

It can be useful when you have a large dataset and only want to display a limited number of rows in your query results. For example, you could use the LIMIT clause to display the top 10 most expensive items, the top 5 best-selling products, or the first 100 entries in a database.

For example, if we wanted to create a table that shows the cost of the most expensive three items, we could use the following QUERY function:

OFFSET is used in the QUERY function to specify the number of rows to skip at the beginning of the table before returning the query results.

It can be useful when you want to paginate your query results or display only a portion of the data in your table. For example, you could use the OFFSET clause to display the next 10 items in a list, the previous 5 entries in a database, or the second half of a large dataset.

You can also use the LIMIT clause in combination with the OFFSET clause to specify the number of rows to return in your query results.

For example, if we wanted to create a table that shows the cost of the first three items within each category, starting from the second item, we could use the following QUERY function: 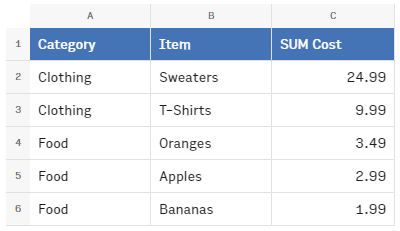 How Rows is different from Google Sheets’ QUERY() function 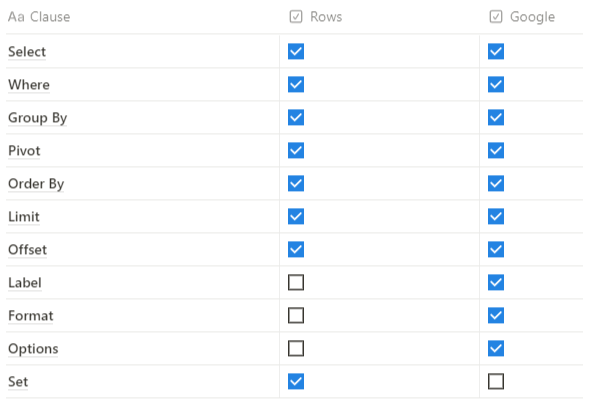 The third argument (headers argument) functions a little differently in both languages.

Common mistakes to avoid with QUERY()

Here are some common mistakes that people make when using the QUERY function in Rows: